To create customized layouts for blocks you can create a new one at step 2, configure selected blocks of the experiment creation process. Below is a screenshot. 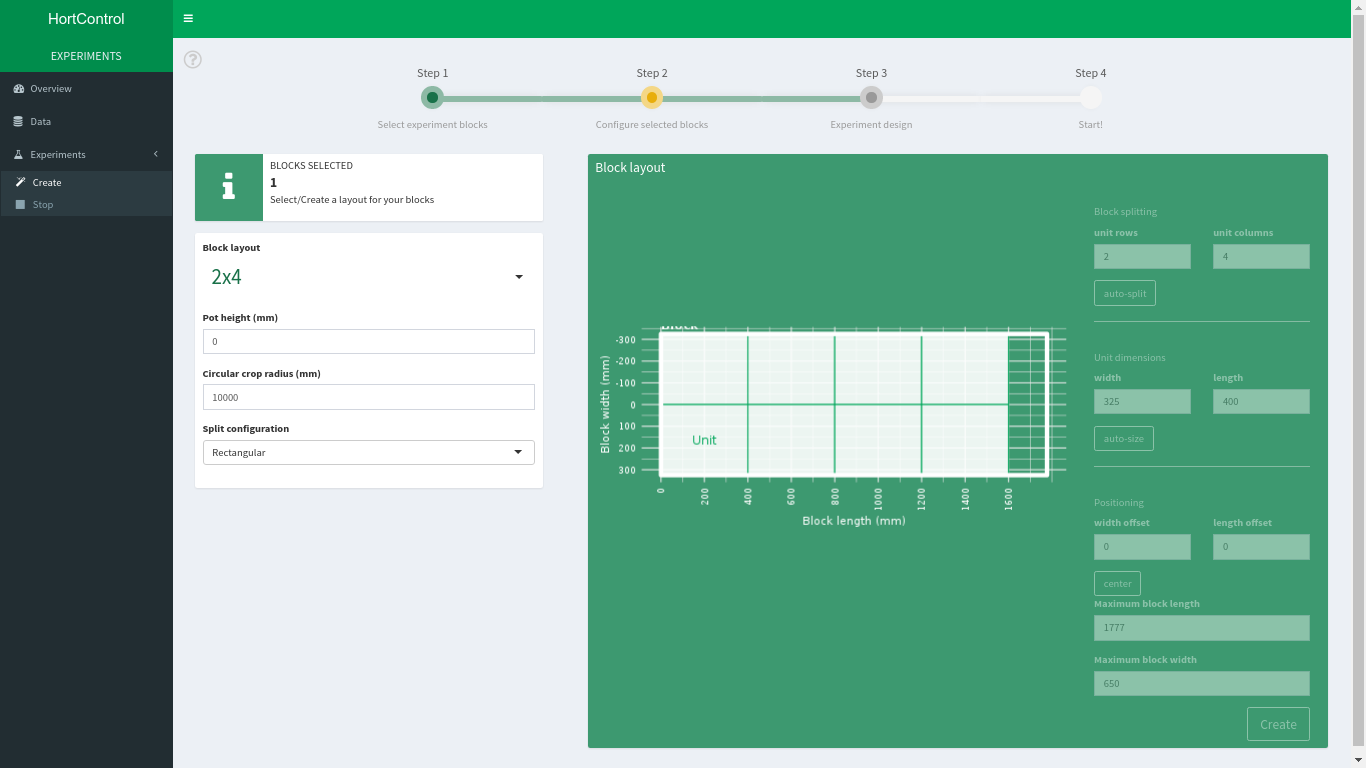 To start creating a new block layout, click on the drop-down menu with the name of the layout, and remove the selected layout with backspace. Now you can start typing a new name and the unit settings for the block on the right hand side become available for editing. 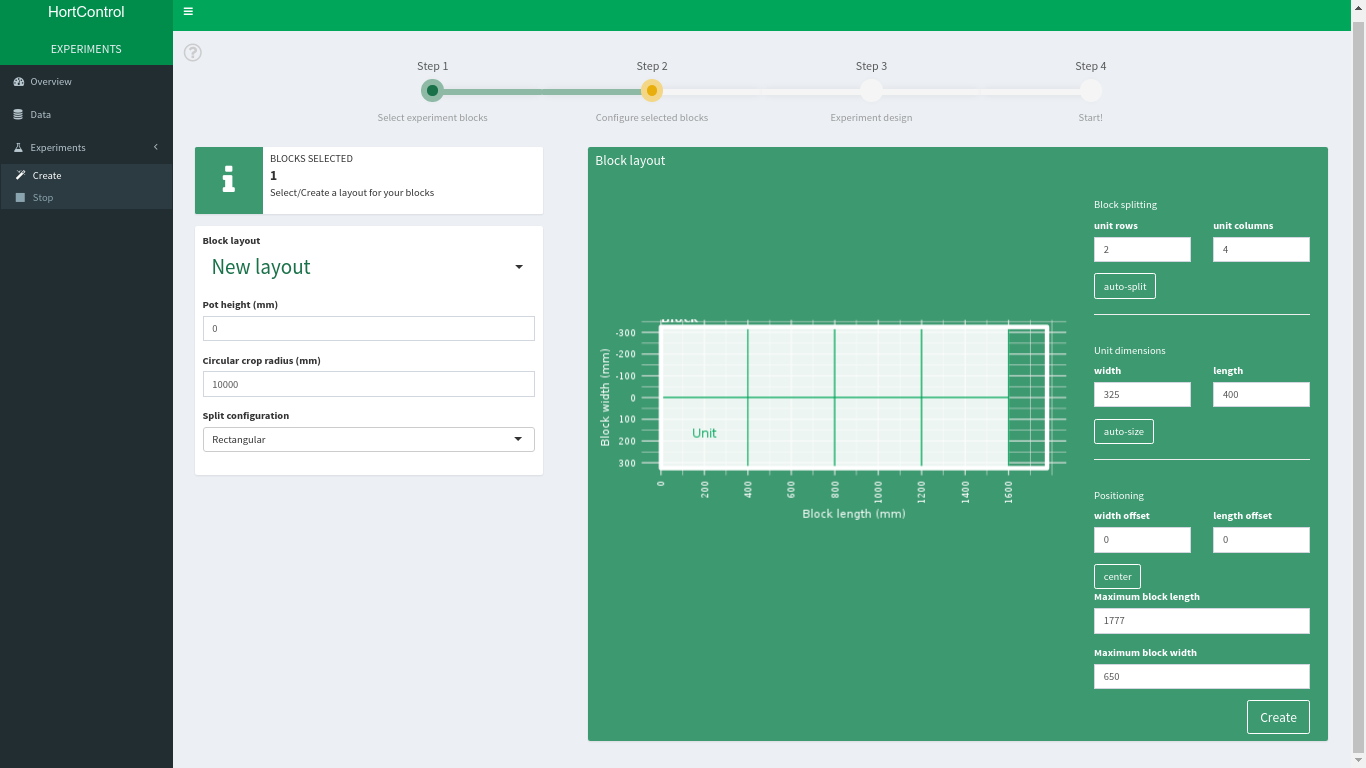 Now you can edit the following:
There is a graphic of how the current settings would translate to the real block on the platform. It is updated constantly as you make changes. On the left side of the graphic, at the block width (vertical) position 0 and block length (horizontal) position 0 is the barcode on the platform. The scanner moves when compared to the graphic from the left to the right, ove the middle of the block. If your setup does not use barcodes, the block length 0 position is generally the starting point of the scanner, and the block width position 0 is directly beneath the scanner in it's middle point of the laser slit. 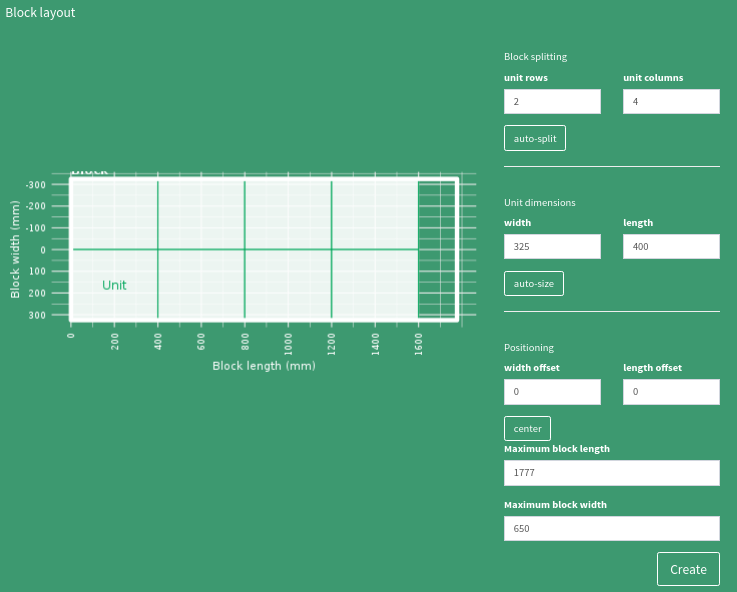 Number of unit rows and colums

Generally you want to create as many individual units as there are plants assigned to the barcode.

One unit now has a width of 650, using up all the block width. The length is 700, and since there are two columns in the block length direction, the total length is 1400. Another example shows the layout with amount of rows at 4, the columns at 8 and width dimension of a unit at 100 and the length at 200

As can be seen from the images above, the starting or origin point of the units is in the to left corner of the graphic, or when standing at block position 0 and length position 0 to the left side of the block. The starting point in width for the unit layout generally has position -325. You can shift the whole layout down by changing the width offset. Above the offset was set to 0, so the default starting point is -325.
Entering 200 for the width offset will yield the following layout:

Similarly, the starting point in the block length direction can be changed. Entering 100 for the length offset gives the following layout:

To change the dimensions of a block you can adjust the length of the block and width. In the below graphic they are set to a length of 2000 and a width of 1000. 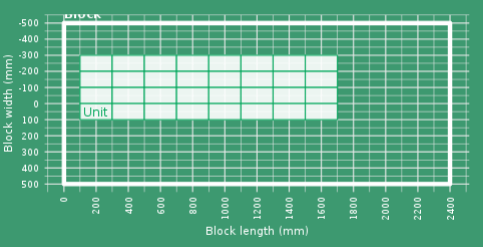 However, you generally should not change these since the blocks on the platform have a fixed dimension. The scanner also can not scan more then the maximum width set as default in your setup, or scan further.